You are what you drive: How are personalities from Audi, BMW, Mercedes-Benz and Porsche perceived? - A comparison between China and Germany

In our first article, we took a closer look at the car brands Audi and BMW and discussed how German and Chinese drivers perceive these cars. Now we will continue with Mercedes-Benz and Porsche and present the different points of view.

Characteristics: An aged, serious man, with very high self-confidence, thus, sometimes stubborn and not open to new things. Does not like sports, obeys all (traffic) rules, but sometimes does not pay attention to other drivers when being in a bad mood.

However, as the reputation of AMG grows fast in the last years, MB AMG became highly popular among young people because "the sound of the throttle at a red light attracts the attention of women". Thus, many young men in Germany take out loans to own an AMG.(7)

The brand Mercedes-Benz has a longer history compared to other brands. The name of Mercedes-Benz contains two names: Mercedes and Benz. Carl Benz was the first inventor who created an engine-powered vehicle. He designed, built, and tested one in 1886. He wanted to offer a “horseless carriage” for the market. (8) (Please note here: only a wealthy family could afford a carriage and horses).

In 1890, Daimler Motoren Gesellschaft (DMG) was founded by Gottlieb Daimler and Wilhelm Maybach as an engineering company and later an automobile manufacturer. The European automobile entrepreneur Emil Jellinek sold cars from DMG. Later he made a deal with DMG to name one DMG model using his daughter’s name Mercedes - Mercedes 35 hp (Mercédè means elegant in French). Jellinek was a smart marketing strategist, he promoted the “horseless” Daimler automobiles among the highest circles of society in France and Europe, his customers included the Rothschild family and other well-known personalities. Later in 1901, he was also selling Mercedes cars in the New World as well, including US billionaires Rockefeller, Astor, Morgan and Taylor.(9) 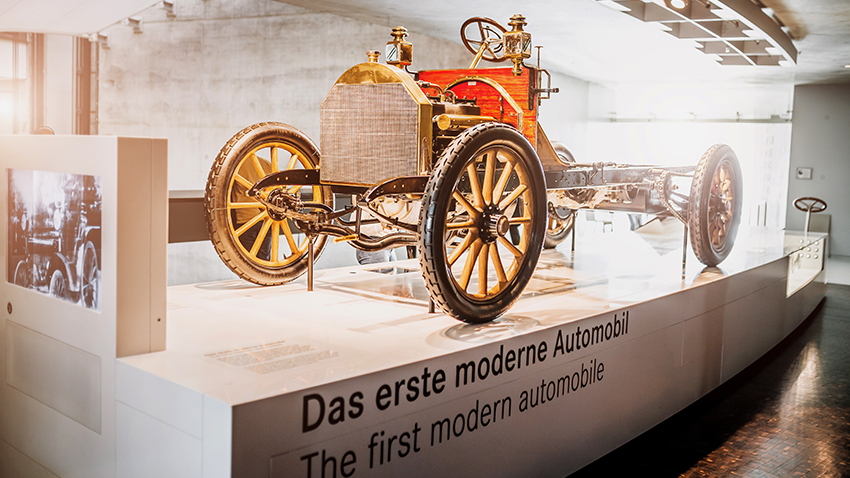 Since people often want to show their wealth through cars, the elderly, who can also afford this brand, choose Mercedes that has already been catered towards wealthy people since its beginnings. But this fact also makes people associate the brand image with “aged people”.

Another reason for the Mercedes preference of elderly people can be explained with the product design: while BMW and Audi are seen as sporty and youthful, Mercedes appears more sedate and solid and it used to be much easier to operate than a BMW or Audi. Moreover, there are still quite a few rear-wheel-drive fans, especially among elderly people, who have no use for Audi’s front-wheel-drive cars and Quattros and the sporty BMW vehicles.(10)

However, Mercedes has tried eagerly to change its image of the “old people car”, a good example could be the update of its A-Class. Alongside more “aggressive” and vivid TV spots, accompanied by “aggressive” music, should attract younger customers. 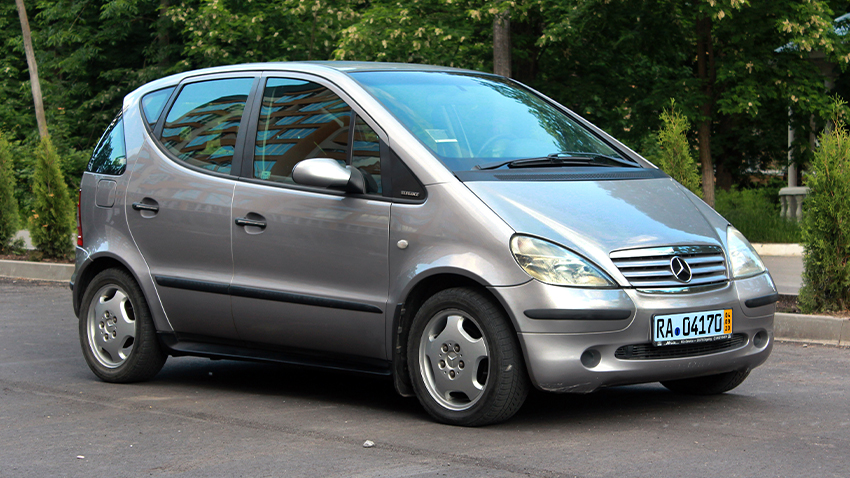 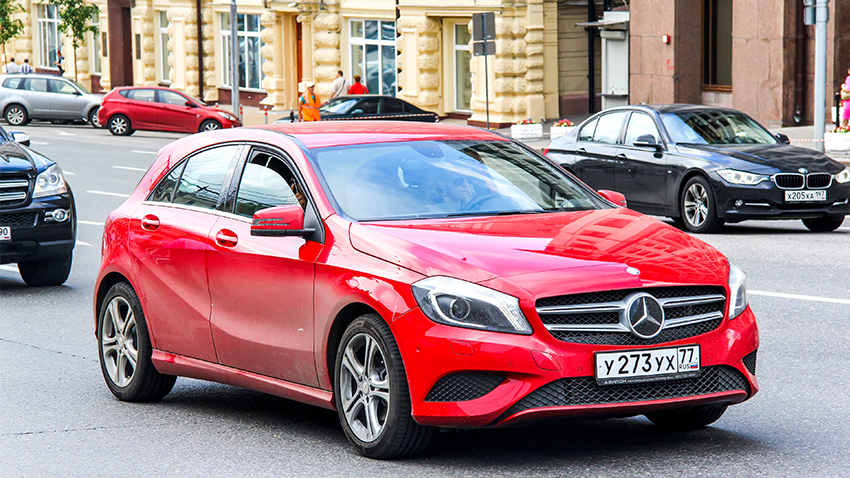 Financial situation and occupation: Owner of a successful private company or a large corporation, lawyer, banker, earns money with his knowledge, is social elite, career-minded.

In 1986, Mercedes-Benz opened its first office in Hong Kong. In 1991, the seventh generation of the S-Class (W 126) entered the Chinese market as imported cars and became the top luxury car brand on the market at that time, which only the wealthiest businessmen could afford. The well sold S-Class (W 126 and later W 140) educated the Chinese consumers about what is luxury. 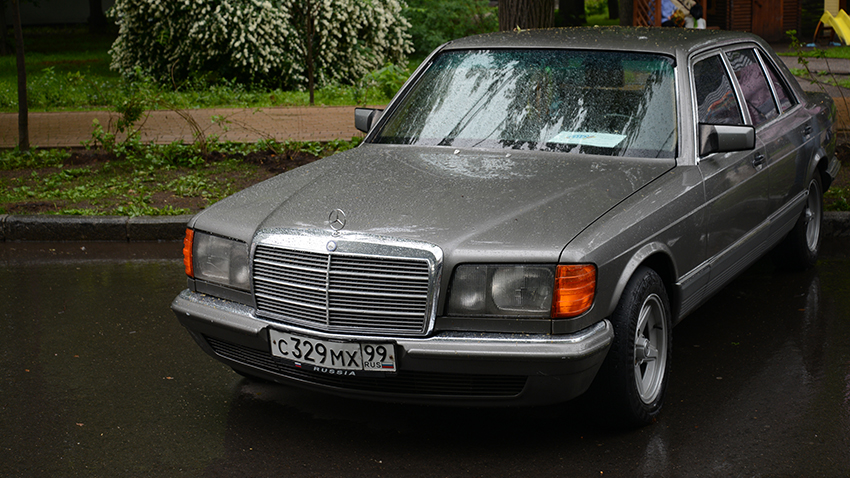 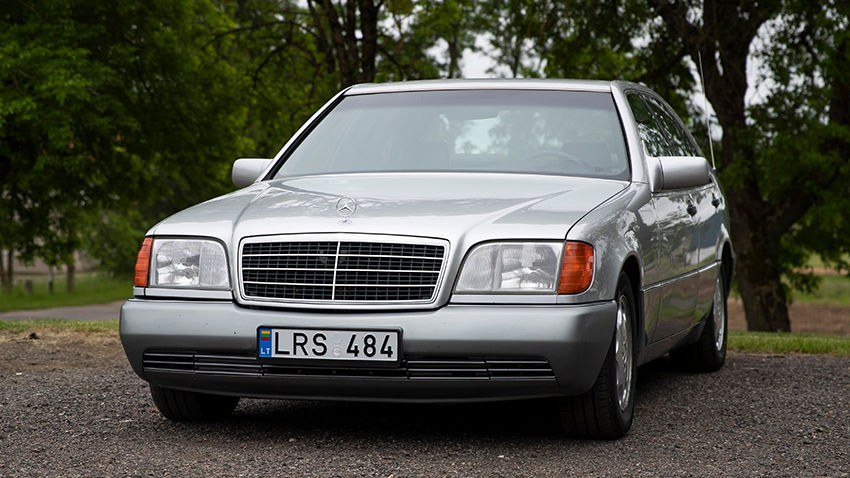 The S-Class back then had a body length of 5.1 meters. The front of the S-Class reminded people of the forehead of a tiger with a “王” pattern, which means “king” in Chinese language. People who could afford a S-Class also saw themselves as the king among wealthy people.

These top wealthy people enjoy socializing and looking after their network. Expensive tea, good wine, antiques and art are their favorite small talk topics. These topics also distinguish them from the BMW drivers, who used to be associated with "people with money but no taste" (but this prejudice has slowly changed as we described earlier.)

Nowadays, Mercedes-Benz is mostly preferred by young women from wealthy, but well-educated and cultured families. This makes people associate the Mercedes brand with an image of an 'intelligent sensual woman'.

Characteristics: Well-kept in shape, loves sports, plays golf. Has very high self-confidence and enjoys showing it. Does not always care about the interest of other drivers. Has little interest in the environment protection topic.(11)

Financial situation and occupation: Very successful with his career, very high income, could be a senior doctor, lawyer, etc.

The company "Dr. Ing. h. c. F. Porsche GmbH" was founded by Ferdinand Porsche in 1913 as a motor vehicle development consulting firm. Its first assignment was from the German government to design a “car for people” (Volkswagen) - and this resulted in Volkswagen Beetle.(12)

Ferdinand "Ferry" Porsche, the son of Ferdinand Porsche enjoyed driving speedy cars. While he was driving a Volkswagen Cabriolet with a supercharged engine, he had the idea to create a car that didn’t exist on the market at that time: A smaller, lighter car with even more horsepower. In 1948, Porsche 356 was launched as a sports car with 2 seats. The body design was original, while most of the mechanicals (including engine and suspension) were derived from the Volkswagen Beetle.(13)

Porsche 356 also entered a race in Innsbruck that year, where it won its class. In 1954, the four-cam racing "Carrera" engine, a totally new design and unique to Porsche sports cars, was introduced. The good performance of Porsche at racing events has made the luxury sports car brand more and more famous. Later, Porsche 901 was introduced as the successor of Porsche 356. Later, 901 was renamed as the Porsche 911.(14) 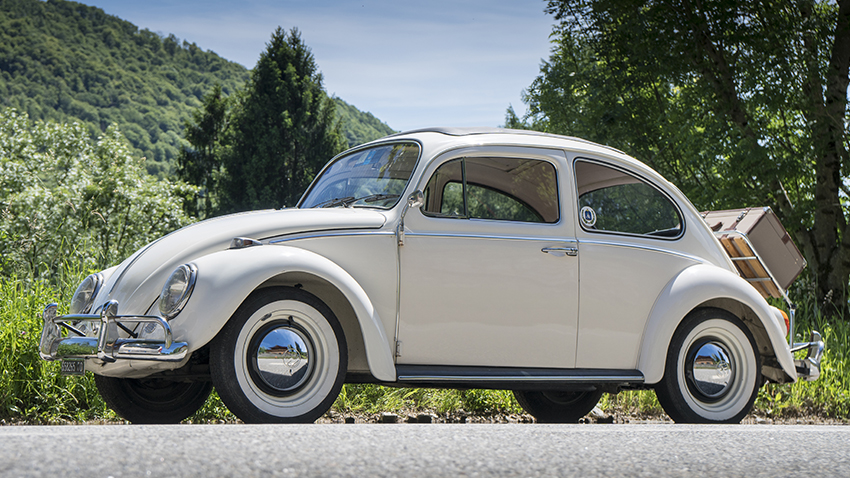 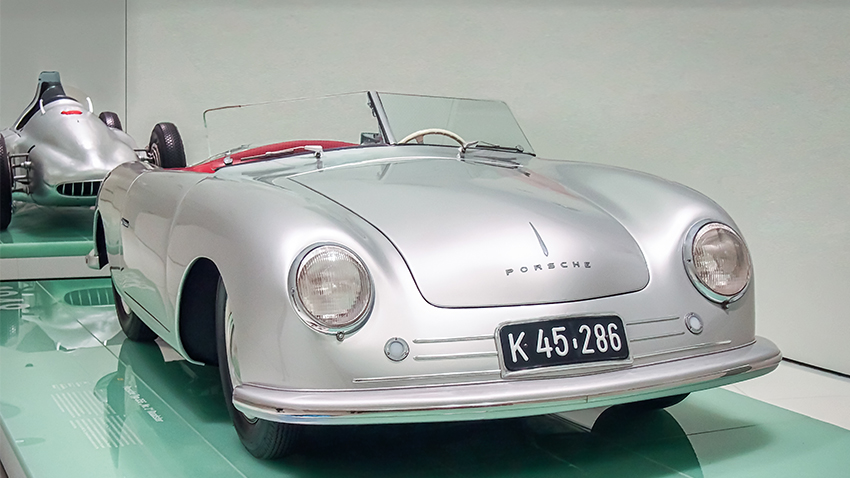 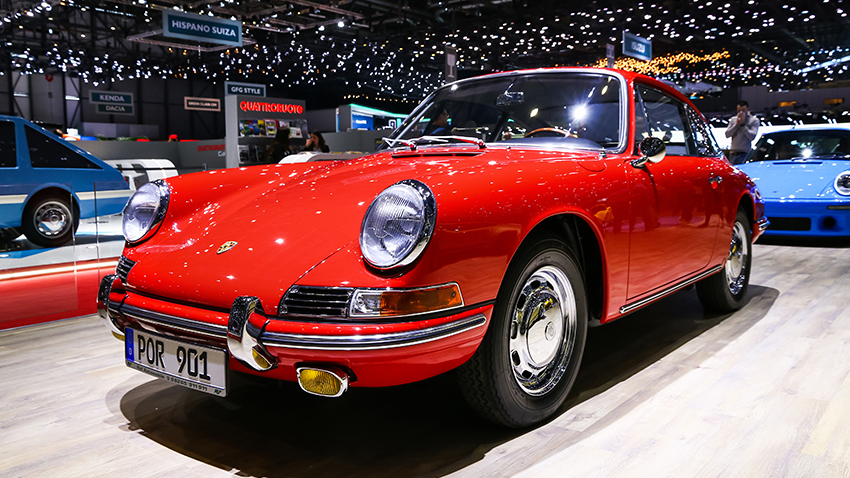 Having a sports car of the luxury brand Porsche is a dream of many (German) men. As we mentioned in the first part of the article, Germans tend to save money to purchase things with one single payment. Thus, men in their 40-60s will tell themselves: Now it is time to make my dream come true. I won’t wait anymore.(15)

German men are aware that a Porsche car will draw a lot of attention. It doesn’t fit into the mainstream and is not suitable for the daily life, such as going to work or doing the groceries. But the purchase of a Porsche is never impulsive.  Usually, Germen men are thinking a very long time about it and decide at the end: “Once in my life, I want to do what I really want and I don’t care what people might think. I will make the pilot's license, I want to purchase the car I have been dreaming of.”(15)

Cars are used to show the status and financial strength by German men (as it is in China). Thus, the brand Porsche with its positioning strategy as THE luxury sports car fulfills people’s needs perfectly. Porsche drivers also want to be different from other drivers.

Porsche is believed to be driven by men over the age of 50 in Germany, but there are constantly news reporting drunk 20 years old Porsche drivers having serious car accidents in the city center in the middle of the night with very high speed.

About the topic of environmental protection: in the last 10 years, there are more and more discussions about the racing event. Even though the car racing culture has existed in Europe for more than 100 years, people start to question these events as marketing activities because of the environmental impact. Due to the risk of a loss of image, the car manufacturers see themselves forced to develop new technologies that are less harmful to the environment.

Characteristics: Outgoing, enthusiastic, likes to try out new things. Enjoys hanging out with friends in very expensive locations, bars and nightclubs. Pays great attention to the appearance, female drivers are very (young) and pretty. Active user of social media, likes to share his/her personal life and communicates directly about his/her wealth (17), but might not know much about car/racing cultures

Economic situation and occupation: Does not need to work or only needs to work for a short period to earn a very high amount of money. 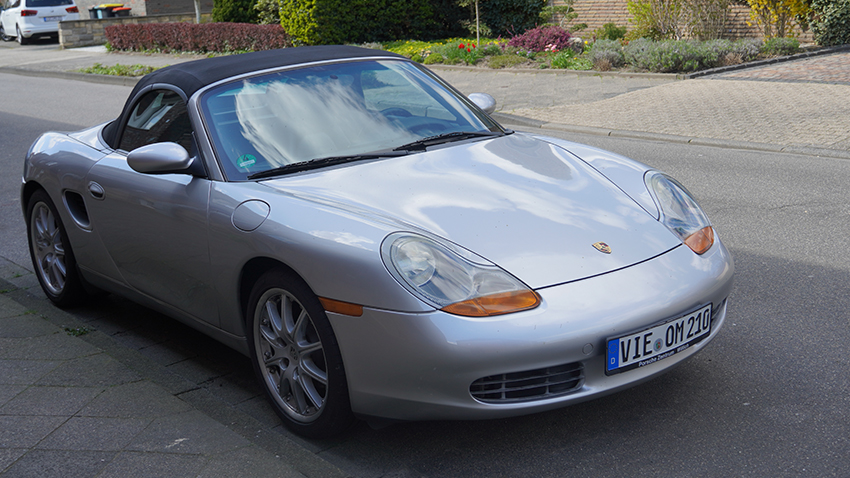 There is no car racing culture in China, but Porsche still sells very well on this market. Its positioning in China is very clear from the beginning: imported luxury sports cars. We know from our various studies that Chinese consumers automatically associate “imported from the EU” with good quality and high prices.

Just like German men, the Chinese also want to use cars to present their financial status. Porsche is also the only car brand to offer a configuration service in China, which is a standard service for European customers but something very new for Chinese consumers, as 99 % of the cars in China are sold as pre-configurated models. Chinese consumers are used to driving their new car home right after the purchase. But Porsche insists on the configuration service and a long waiting time (about 6 months) is partly seen as “not suitable for an impulsive purchase” and partly seen as “something very special, like purchasing a customized suit, which indicates wealth, luxury, and good taste”.

One of the reasons why Porsche has such a young personality image is because this brand is used to “show off personal wealth” which makes it not suitable for business contexts. Only those who do not need to work with clients have a higher “chance” to drive this car around and to be seen on the street. These young people also enjoy posting short videos or pictures on social media, which enhances the young driver's image of this brand. As in Germany, there is constantly news in China reporting car accidences caused by 20 years old Porsche drivers.

At the same time, there is also another brand personality which is being perceived more and more: 30-40 years old men, with very high career success who have money, a good taste, a dominant character, ambition and see the bigger picture.

As we observed in the first and the second article, the brand personality images sometimes vary extremely in Germany and China.

It has a lot to do with the brand history perceived by the consumers in these two countries: All of the four brands started their business in Germany/Europe and consumers there are more or less familiar with its heritage and tradition as well as its development. They grew up together with the brands. However, in China, these four brands entered the Chinese market in different eras of the rapid economic development, the political, economic and cultural background of each era was very different from each other.

We know that all four brands mentioned in this article are working hard on their brand images, both in Germany and China. Meanwhile, we also observe there are more and more Chinese car manufacturers trying to enter the German/ European market, just like how the German brands did in China.

We are closely tracking the brand personality image and looking forward to gaining new insights.

You are what you drive: How are personalities from Audi, BMW, Mercedes-Benz and Porsche perceived? - A comparison between China and Germany - Part 1

The endless desire of being prettier: A booming beauty industry and the body anxiety among Chinese women and men