Driving a Modern Electric Vehicle in China? Not in Summer.

When I first started to work in the automobile world in Germany, the first word in English I learned was “cabrio”. I’ve already known this word in Chinese for a long time, but it was just a definition, as this is the type of car I might have seen in a Hollywood movie, however, never on the streets of China.

While I was helping to sort out the data of the new car buyer survey, I was surprised by how many cabrios German people are driving. Back then, I thought that the air quality in Germany is good, it is not a bad idea to open half of the car while driving. Besides, the Europeans are famous for enjoying being exposed to sunlight to get tanned, while all Asians want to be “as white as Snow White”.

Later in the summer, a male friend of mine in China came to Germany and visited me. Guess what - he rented a cabrio. As I sat in the fancy car, the first thing he did was to close the top, telling me “I know you don’t like sunshine” – and I really don’t, so I missed my only chance to drive in a real cabrio. I really wanted to know how it feels to have a full-sky-view. It must be a great feeling.

All-glass roof is the new trend

It seems the EV manufacturers have sensed my wish – Tesla first launched a car with all-glass roof, then plenty of Chinese EV manufacturers (Xpeng, NIO, Li, BYD, etc.) started to offer this feature as well, not as an add-on feature, but as standard for their models. All manufacturers claim that the roof itself absorbs 99 % of the UV radiation coming in, meaning we won’t get tanned! In this case, we will be the modern Snow White with a sky view in our new carriage, how romantic is this? 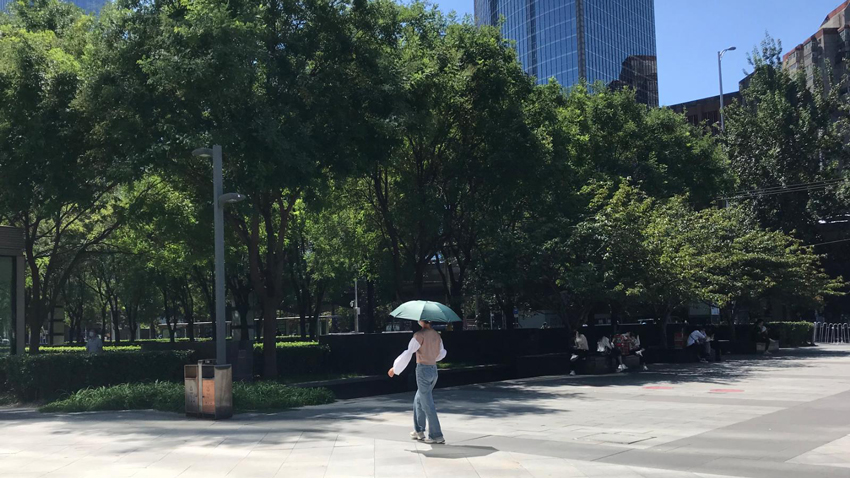 One of the hottest summers in recent Chinese history

Shanghai’s daily highest temperature was over 40 degrees for several weeks. Even in the north like Beijing, 39 degrees have become the usual temperature this summer.

Driving during the day has become a nightmare for EV owners with an all-glass roof. The temperature in the car rises in a very short time, basically, the entire car becomes an oven. Even though the AC is on all the time, peoples’ heads are still directly exposed to the strong sunshine. Drivers and passengers in the car start to wear a cap or hold an umbrella to protect themselves.

Check out these links to see photos showing how people protect themselves from the sun while driving:

The Si-Chuan area in China is still experiencing very high temperatures right now. Every family, office building and shopping mall has the A/C working almost 24 hours per day, just like in every other city in China. However, the electrical grid reached its limit a few days ago.

Most of the electricity in Si-Chuan comes from water power, but the high temperatures cause drought. The government has to cut down the power supply, making EV manufacturers temporarily close multiple charging and swapping stations in the region.

In this case, EV drivers might not be able to drive at all if they don‘t have a charging pillar at home. Even if they do, they might get criticized by neighbors for using too much power while the whole region is suffering from a lack of power.

What does this mean for business?

Are the modern features in cars really what the (Chinese) consumers want?